Nerd in the City Book Club 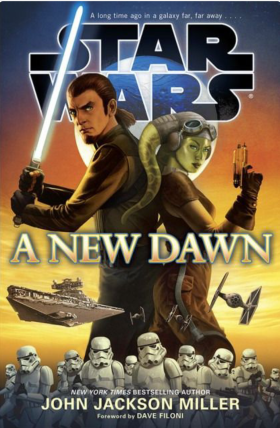 Once Disney and co. decanonized all of the existing Star Wars novels, relegating them to “Star Wars Legends” they made quick work of ordering all the new novels that would take their place in the new canon alongside the movies and Star Wars: Clone Wars and the brand new Star Wars: Rebels.

A New Dawn picks up about a year before the new Disney XD cartoon, that’s already been picked up for a second season. IT follows future crew mates, Kanan Jarrus an ex-Jedi just trying to survive in the aftermath of the Jedi purge and Hera Syndulla, an impressive Twi’lek pilot with secrets of her own.

Star Wars is always at it’s best when unlikely allies come together to take down a big bad that is doing unspeakable evil. This novel sits comfortably in a world we know and love, employing references to Obi-Wan, Darth Vader, Emperor Palpatine and even Grand Moff Tarkin. Yet it has it’s own story to tell and creates a lovely lead in to the TV show that is just on the horizon (episode 1 has already aired and will be re-aired on ABC at the end of Oct. with a special scene featuring Vader himself, voiced…of course, by James Earl Jones. Don’t miss it!)

It’s great to see a strong female character, which Star Wars has never had a problem portraying. They’ve only ever had too few of them to portray. A problem I hope to see disappear in the new film as well as in Rebels.

A lovely gentleman at the Del Rey booth gave me a copy of this book, officially making him my favorite person at New York Comic Con this year!!