Last week can only be described as amazing, soul-refreshing and down right exciting. You already saw my solo adventures at not one, but all four of Disney World’s theme parks. But here’s the part I didn’t show you.

I actually can’t show you. See…my phone died right after I ate what looked like a delicious Mickey Mouse shaped pretzel, but really was old tire rubber that had been sitting in the sun since 7am. 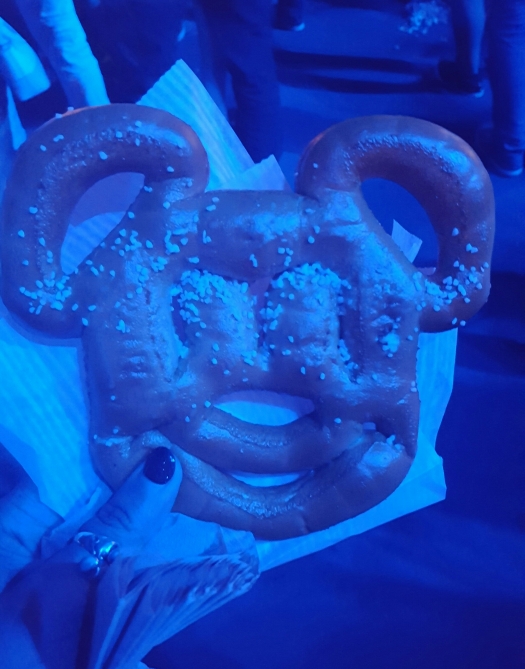 Pretzel notwithstanding, there was magic in the air as I returned to Hollywood Studios, where I’d started my grand adventure.

There has been one other time in recent Disney history that I’ve stayed for the fireworks at the park. And it’s because 2 equally minded, childlike spirits knew as I do just how much magic a fireworks show can hold. I may be overselling this. But the majority of the time when I go to a theme park, at the end of the night, my party is worn out, tired and just wants to beat the traffic. The best way to do that is to skip the fireworks and high tail it out at about 7:30pm. That’s the formula for skipping as much Disney traffic as you can.

But this time it was just me. And traffic, when I have nowhere to go, doesn’t bother me in the least. Especially if I have open windows and a good radio station. Bring on the tail lights!

So I stayed for the fireworks. Specifically the new Star Wars Spectacular at Hollywood Studios cause…well, duh! It’s me! It was always going to be the Star Wars Fireworks show!! I wish I could show it to you, but I’m sorta glad my phone died. I love to share my photos and bring people into my adventures as much as I can. But this was just for me (and the thousands of other people that stayed late too.) You can probably Google the show, find clips on the internet and pictures on Instagram, but I beg you…don’t! Make a plan, if you can, to get to the park and see them live. Let your phone die and live in the magical moment that it absolutely is. I was nearly in tears…it felt that magical. The way the lights and music perfectly complimented my favorite story in the whole wide galaxy…there is really no other word to describe how it felt…it was magic. And I haven’t felt magic like that in a while.

Without a doubt this has been a challenging year. And I have felt, at times lost, at times angry and at times like it wasn’t worth it at all. It’s not true…it’s worth it. It has been worth it the whole time. And not just because of magical fireworks on a balmy Thursday night. I seem to be most attuned to God and myself when I am acting like a kid. I tap into a part of myself that I seem to abandon more often than not these days. She and I used to be much more in sync, but the older I get the farther away she feels.

That magic isn’t lost! In fact I found that magic the very next day when I decided, on a whim, to go paddle boarding off Merritt Island. Another instance of a magic moment that I will just have to keep in my brain because I didn’t bring my phone with me. So this is the only picture I took of the whole adventure: 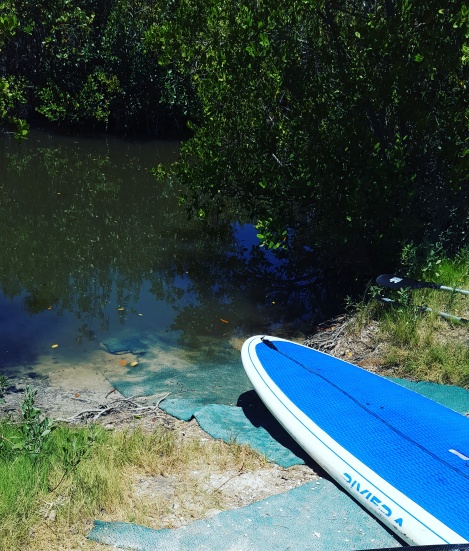 It was 11am on a Friday morning. The breeze off the water was perfect and the sun was shining down just enough to give me a nice sun tan/burn glow. I was paddling along by myself, trying to remember how to do it, since it had been a while, when I saw a fin. My heart froze…and I thought “OH SHIT!” Then, I saw another and another. I took a deep breath and the time to notice the shape of the fin and was delighted to see a pod of dolphins headed straight for me. Four adult dolphins and a baby just happily swimming towards the channel and passing me by on their route. I stood in wonder at the sight of them just five or six feet off my starboard bough. It was nothing less than magical!

I followed the pod and watched as they interacted with one another. Squeaking and jumping in the air. I wish I could show you, but again, I’m kinda glad I can’t! It was a moment made just for me. There was no one else on the water right then and by the time other people came into view, the dolphins were gone.

These are extraordinary moments. And they don’t happen everyday. After all “if life were made of moments, even now and then a bad one! But if life were only moments then you’d never know you had one.”

I guess what I’m saying is that when magic comes along don’t spend all your time trying to take a picture of it. Let your phone die or leave it back on shore and keep that magic for yourself. There will be plenty of other things to share with people. Magic is something special. And since it’s rare, take care who you share it with.

Truth is, even this blog can’t effectively convey the rejuvenating magic that happened to me somewhere between Disney and the water. But I feel like myself again. I feel the ideas and the excitement of my life again. Ideas and excitement that never left me. God doesn’t take away your creativity. It’s you who walks away. And if you’re lucky you come back and remember who you are. Take the magic when it comes! Seek it out if you have to.

“Just remembering you’ve had an ‘and’ when you’re back to ‘or’ makes the ‘or’ mean more than it did before.”

I hope you find magic today. And I hope I never get to see pictures of it!

5 thoughts on “Something Magical Happened, But I Can’t Show You”