There are so many shows and movies set in New York City. But out of all of them, Friends is probably the most poignant for women in their 25-35’s. It’s what we grew up watching and dreaming about. It just seemed like the coolest group of people on the planet. (Still does in reruns!)

So Roommate and I decided to take a tour of some of the places that were used in or mentioned on the show. Friends was not filmed in New York, but we found plenty of spots important to Monica, Rachel, Chandler, Phoebe, Ross and Joey!!

First up: The Museum of Natural History on W. 81st St and Central Park West. 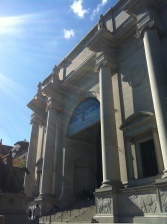 This was the building used in exterior shots for Chandler’s office. Chandler worked as an “IT procurement manager with the specialization in ‘Statistical analysis and data reconfiguration.'” In one of my very favorite episodes, Rachel misses this question in a trivia game against the boys and ends up losing her and Monica’s apartment to Joey and Chandler. The losing answer to the questions “He’s a transponster!!”

Next up: Bloomingdale’s on 59th and Lexington

Bloomingdale’s is where Rachel Green worked from seasons 3-5 as a Buyer and then later was demoted to a Personal Shopper after her boss Joanna died.

Probably the most important: The Pulitzer Fountain, outside of the Plaza Hotel, across from Central Park.

The filming of the opening credits did not occur in New York. They actually made a replica of this fountain and shot the opening in LA. But the structure still remains the same.

Then we went to: Pottery Barn

Pottery Barn is basically Phoebe’s nemesis. When Rachel and Phoebe live together in season 6 of the series, Rachel begins to fill the apartment with seemingly beautiful antique furniture. Ross begins to buy the same pieces for his apartment, leading Phoebe to find out that these pieces are not from Vintage Flea Markets selling Colonial furniture, but the big bad Pottery Barn chain store.

Phoebe: Well, what period is it from?

Rachel: Uh, it’s from yore. Like the days of yore. Y’know?

Phoebe: Yes, yes I do. God, oh it’s just perfect! Wow! I bet it has a great story behind it too. Did they tell you anything? Like y’know where it was from or…

Rachel: Yes! That I know, this is from White Plains.

Phoebe: (gasps) White Plains. Oh, it sounds like such a magical place.

Finally we went to: Central Park 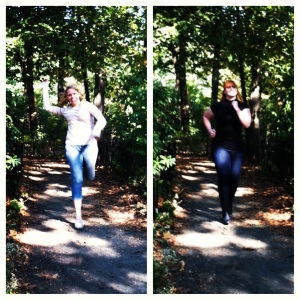 There are so many important moments that take place in Central Park on Friends, but our favorite by far was from The One Where Phoebe Runs! Rachel and Phoebe decide to go running in the park together, but Rachel soon regrets the decision once she sees the crazy way Phoebe runs. Phoebe goes on to explains why she runs that was saying, “Me, I’m more free. You know, I run like I did when I was a kid because that’s the only way it’s fun. You know? I’m mean, didn’t you ever run so fast you thought your legs were gonna fall off, you know, like when you were running towards the swings or running away from Satan?”

One thought on “Friends Tour”