I am embarking on a rather large undertaking. For those super fans out there, you know what I mean when I say Expanded Universe. And you also know that the entire library of books that you previously believed to be canon has been relegated to Star Wars Legends. Meaning, they no longer exist in the regular Star Wars Universe. To  most, this is a big, fat disappointment because that’s all we’ve known. Mara Jade, Jaina and Jacen, Ben, little Anakin, Grand Admiral Thrawn, the death of Chewie. These are all stories that we are aware of and believe to be apart of a grander universe that we know and love.

But fans, it doesn’t have to be a bad thing. I like to believe that the novels are some sort of alternate universe. Like they could still all be true somehow. Making them Legends doesn’t diminish the excellent quality of writing and story telling. It just allows for a whole new onslaught of tales to delve into.

So here’s my mission. Between now and December I am going to plow through as much of the Expanded Universe: Legends as I can, starting with Timothy Zahn’s Thrawn Trilogy and hopefully making it all the way to the end which would be Crucible by Troy Denning. That’s 69 books in all. I’ve definitely got my work cut out for me. (Especially since I’m not the fastest reader.)

After December, I will be devouring every single new canon book, comic, etc as it becomes available. I invite you to join me with the hashtag #NITCBookClubSW Let me know what you’re reading, if you like it and how you feel about Legends vs new canon. We’re all in this together, Star Wars nerds.

Heir to the Empire 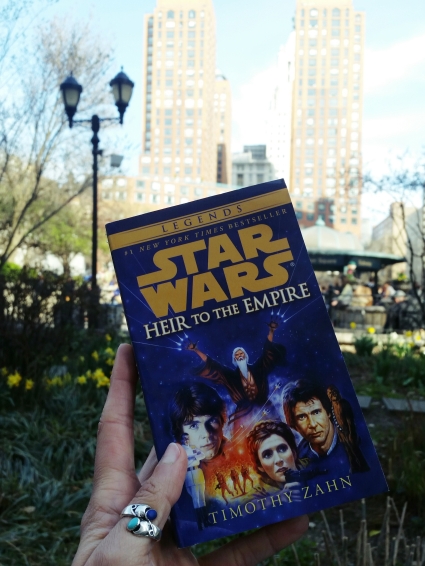 I read this book years and years ago. And I don’t know how this happened, but I forgot how amazing it is. Timothy Zahn was already an amazing sci-fi writer before he was unleashed on the Star Wars Universe. And he is made all the better by writing for these beloved characters in a galaxy far, far away!

All the characters that we love are back in this action packed story set in the time of the New Republic. Obviously Vader is the biggest and bestest of the bad, but if there is someone who is a decent predecessor to his pre-redemption evil intentions, it would be Grand Admiral Thrawn. The last of the Grand Admirals. Who takes it upon himself to rebuild the Empire and fight the New Republic that has been trying to rebuild since the Return of the Jedi.

Leia Organa Solo is pregnant with twins and still managing to go on diplomatic missions to expand the reach of the New Republic. Luke is being tracked by a mysterious woman who is hell bent on seeking revenge. Lando is back. Han is back. Chewie is back!! It’s everything you love about Star Wars. And Zahn’s voice fits in so perfectly with my predetermined ideas of the SWU.

A seriously great addition to the Star Wars Universe and an excellent place to start if you are thinking of joining my Nerd in the City Book Club Challenge. 69 books between now and December. Join me and together we can…. read a lot of books!

May the Force be with you… always!