The question on everyone’s mind lately… “Is Kylo Ren Redeemable?” or as my guest blogger Michael Burgett queried yesterday: “Will Kylo Ren Be Redeemed?” If that question is not on your mind, then you just haven’t seen Star Wars Episode VII: The Force Awakens enough! Go watch it again and then we can talk!

Reader, you know me by now. I’ve shared many an embarrassing story with you. I’ve told you about my dates and about my family and about my hopes and my dreams. I believe that you truly know me, in all my pie-in-the-sky optimism. So, of course, my answer to both the aforementioned questions would be yes. Yes, Kylo is redeemable and yes, he will be redeemed. In fact, I’d go further and say it is merely a matter of time till he is redeemed. And it is one scene in particular that gives me this hope for the son of Han Solo to find his way back to the Light.

Han is leaving the Rebel base to go destroy Starkiller and confront his son who has turned so far from the path that Han, Leia and Luke had wanted for him. Leia and Han share a tender moment of goodbye, not knowing that it would be their last moment together. Leia says to Han “there is Light in him.” And as we know, this is a strong theme in the Star Wars universe. The presence of Light is more than just a touch of the good side…it is hope. Padme felt the Light in Anakin. Luke felt the Light in Darth Vader. That pull to the Light is a powerful feeling.

Often it is the Dark side that is given all the strength of power. And in the past we have witnessed the pull from the Light to the Dark in Anakin’s journey. Kylo’s journey, for us, starts out in the Dark with that sliver of Light still shining inside him. Light that he is desperate to eradicate and turn from. 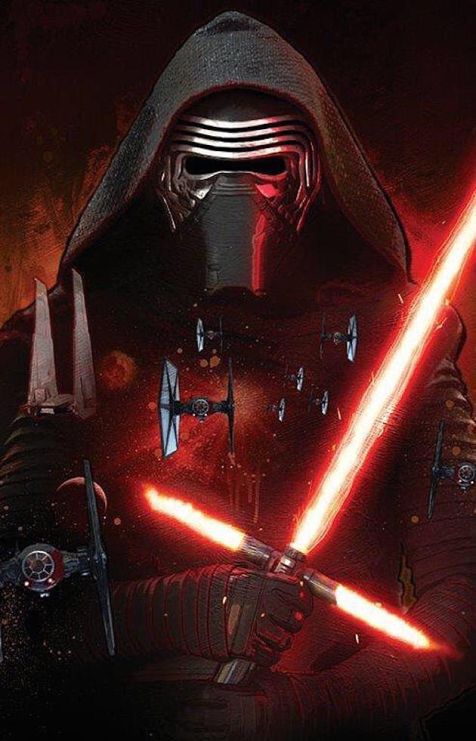 Now, I know what you’re thinking. All that Light talk happened before Kylo kills his own father, our beloved Han Solo. Tell me something…does one deplorable act completely erase your humanity? Some might say yes, but I say no. (It’s a different story when it comes to the Emperor. Ask me about it sometime!) Kylo is still Leia’s son. And in the end when Kylo comes back to the Light side, he will have to fully feel his actions on Starkiller base. The Dark side allows you to cloud your true feelings and boil them down into pure anger. But as any person who has experienced anger knows, there’s usually something else going on underneath it. And Supreme Commander Snoke knows this. He is pulling Kylo’s strings the way Emperor Palpatine pulled Anakin’s. The Dark side is manipulation and lies.

Now, I really like the point that Michael in his article yesterday. If this were just a villain, like Darth Vader was back in 1977, then we wouldn’t be having this argument. We don’t argue whether Hannibal Lecter will be redeemed or if Lord Voldemort will come back to the side of good wizardry in the end. But in 1983, when Return of the Jedi was released, George Lucas taught us that even a bad guy as bad as Darth Vader himself could find redemption and bring balance to the Force. Let’s not forget that lesson just because Kylo Ren has no prophecy to bring about his redemption.

We, the viewer, had no idea what history lay underneath Vader’s mask till the prequels came out in 1999. With Kylo, we know a little of his history, but none of his motivation. Why did he turn? What drew him to the Darkness? What lies about Darth Vader’s legacy has he been told? And if he finds out the truth about The Chosen One, will that make a difference?

All will be revealed in due time, reader. We may have to wait a few more months than we want to with Episode VIII being pushed from May 2017 to December 2017. But think of how happy your Star Wars friends will be to have another onslaught of delicious merchandise to acquire that Christmas. It’ll be so easy to shop! So in the end, the wait is worth it. And we can continue our speculation up until the very day when the truth is shared with us.

In the meantime, I invite you to come join my Nerd in the City book club on Goodreads. So much delicious Star Wars Expanded Universe reading material to dive into and dissect!! Do not miss out!