I was posting my Paris recap blog posts very regularly for a while there. But for some reason when I went to post the blog about the last day of my grand adventure, something held me back. I couldn’t hit “Publish.”

What it boils down to is this…I didn’t want the trip the be over! I wanted to savor it for as long as I could. I wanted to hold on to each moment for ever and ever! But let’s face it, I’ve been back in Florida for almost 2 months. The trip has ended. That’s just a fact! But just because the physical trip itself is, in fact, over, doesn’t mean I have to lose the spirit of Paris. It’s something I now take with me every day. That experience changed me or at least I hope it did.

So…here it is! My last post about my adventure in Paris. Day 7. Because, even though the journal has been shared, just because this chapter has been written, doesn’t mean there isn’t more to my story!! After all…that’s how books work, right? Chapter by chapter.

“This is it, my last morning in Paris. I’m breakfasting in Montmarte before the shops open. I found a café, at the base of Sacre-Coeur…they’ve never heard of a mimosa. But were willing to make one for me this morning. I’m pretty sure I just changed their lives for the better!! And I made my mark on Paris. 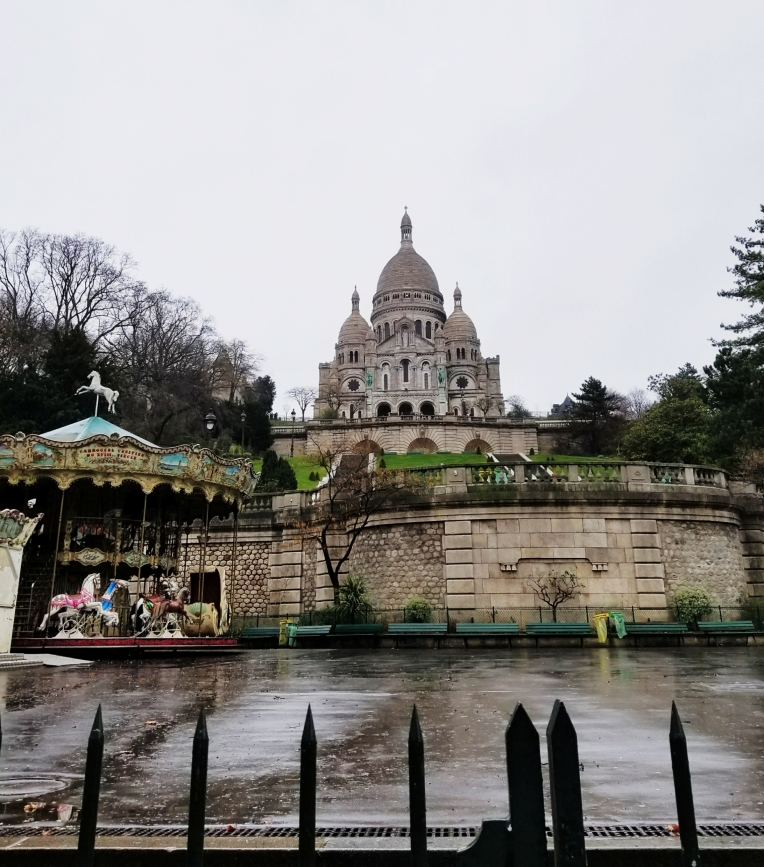 After this trip, I’m even more convinced that fully exploring one city at a time is the way to go. I have no desire to race from country to country. I like taking my time and becoming engrossed in the culture of the places I’m going. I want to let it effect me. 7 days isn’t even close to enough time to get to know Paris…I need more! But it will have to do for now. It’s been an excellent sampling and I know in my heart…I will be back!

This trip has been everything I could have dreamed it would be and more…so much more! I am relieved that I ended up coming on my own. Not that company would not have been welcome. But I feel like this time by myself, this time apart has given me perspective. And perspective is a beautiful gift going into a brand new year. I have high hopes for 2018.

It’s time to say goodbye to Paris. I’m on the train to the airport and I just don’t want to go. It’s as simple as that. This trip has changed me. I hope I can hold on to the person I rediscovered over here. She’s pretty great! And until next time, I’ll always have…Paris!! Because, much like New York City, once you let her under your skin….she stays there forever!”

And now for some outtakes from my camera roll. Photos that would normally never see the light of day because I’m picky when it comes to pictures, but I kinda want to share because of how purely me they are. Enjoy:

“It’s officially 2018. My word for this year is BRIGHT and I think I’m off to a really great start!

I’m off to “L’endroit le plus heureux sur terre.” Which according to Google translate mean, “the happiest place on Earth.”

Oh, hey! Bonus! All the subways and trains are free on New Year’s Eve and most of New Year’s Day too. What a lovely New Year’s gift! Thanks Paris! 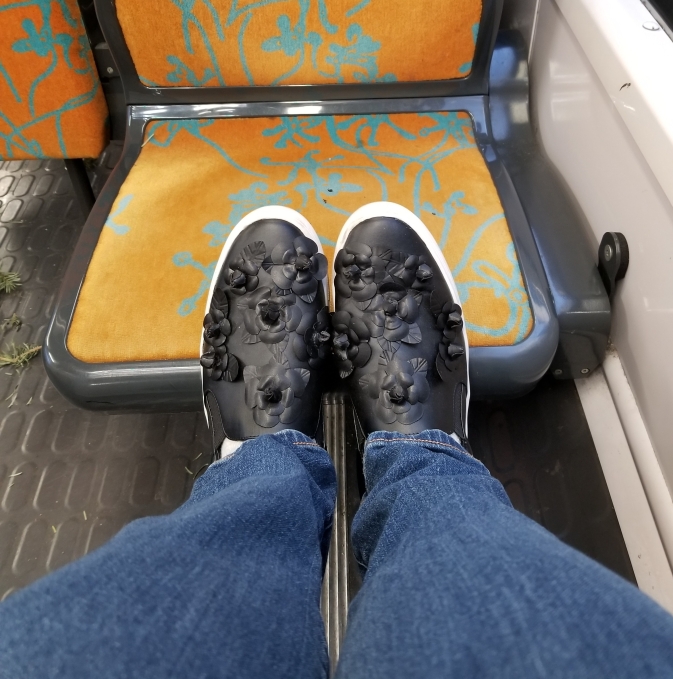 I’m eternally grateful that today and tomorrow include lengthy train rides in my schedule. My feet are in dire need of a rest after last night. Plus, I always did like train rides out of big cities and then back again. I used to love the train rides I’d take up to Bedford in New York. There’s something so soothing about watching the world fly by you.

I debated about including Disneyland Paris in my itinerary. Should I…shouldn’t I? Is it really how I want to spend one of my precious days in Paris? But the answer kept coming back as a resounding…YES!!! After all, this trip isn’t about the Eiffel Tower (though she was just what I needed last night.) It’s not even really about Paris itself (thought she is a dream I want to live in always.) This trip is about me! Letting go of things. Discovering new things. And ultimately…being incandescently happy for as long as humanly possible.

My rose gold ears…the coveted ears of the year, come from @michelleashleyhoughton and @desirae_jae on Instagram. I won them from those beautiful Instagram ladies and they added extra magic sparkle to my day!! Thanks ladies!!

And may I just say…as I walk up Main Street and see that big, bright, pink castle waiting for me….this was the best decision for today!! 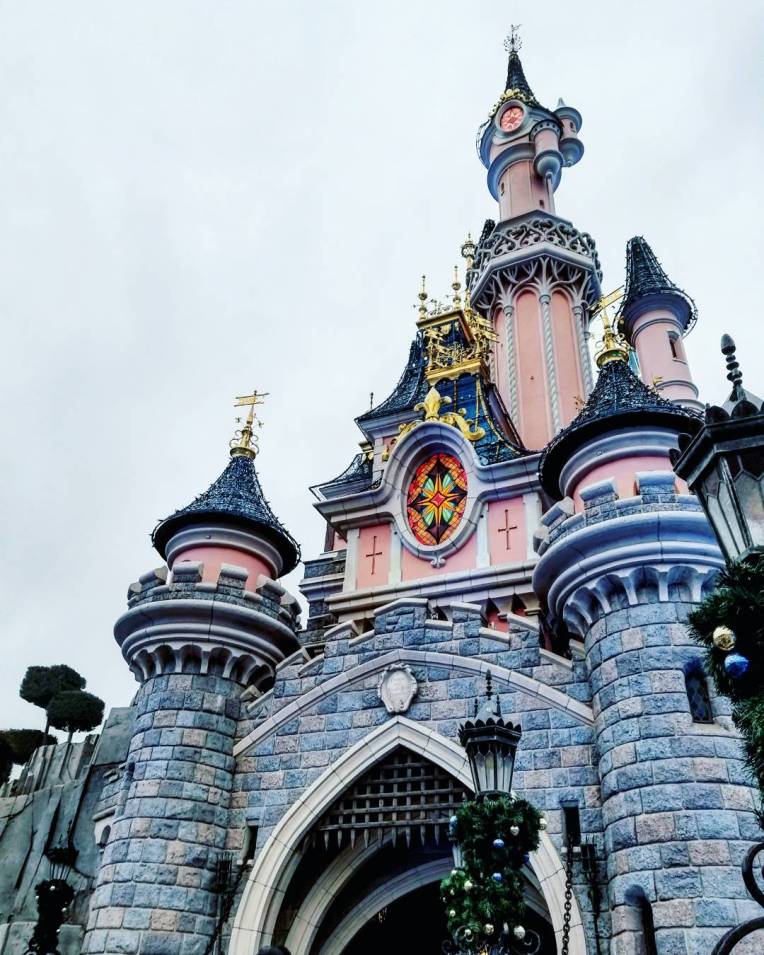 You guys!!! This place is amazing! They have Sleeping Beauty’s Castle instead of Cinderella’s and…IT’S PINK!!! Could there be anything more lovely about today?!! 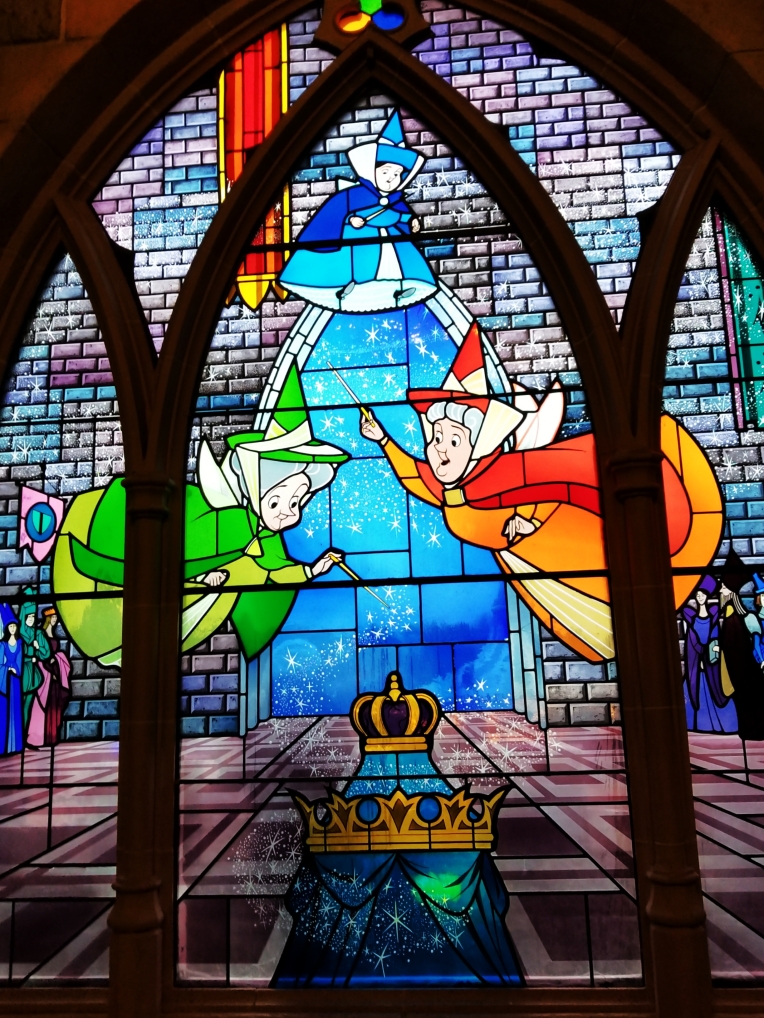 What I loving about Disneyland Paris are the similarities and differences between this park and Disney World back home. The park retains that familiar Disney flavor, but it also has it’s own spice to offer. Plus…I have a new FAVORITE RIDE OF ALL TIME. Hyperspace Mountain. It’s Space Mountain, but with Star Wars (and without the crick in the neck when you get off.)

Couldn’t leave without getting a pic with little Annie! 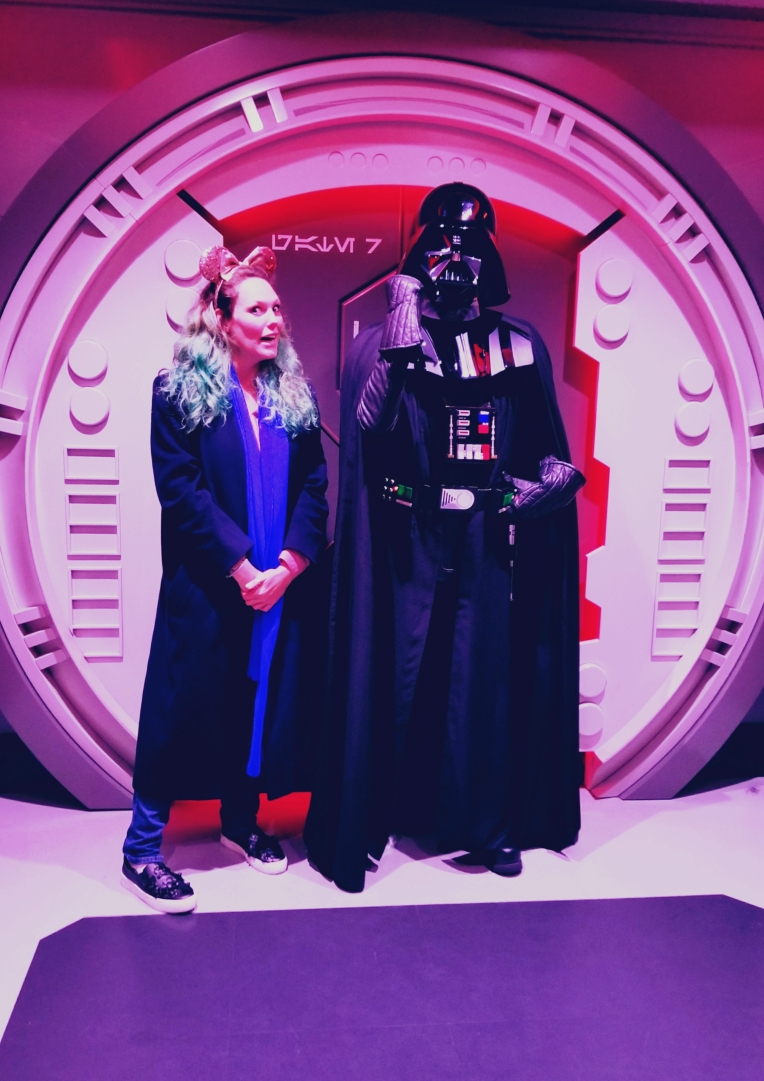 One thing that is different here is their “Haunted Mansion.” In Paris they have “Phantom Manor.” Doesn’t that just roll off the tongue…”Phantom Manor.” You can’t help but say it with an accent. Or maybe that’s just me!

I picked the perfect day to go to the park because #1: Everything in Paris is closed on New Year’s Day…says so in my guide book. And #2: This is the grossest, soggiest, most dreary day. And because I’m at the happy place, the rain and the cold…they just don’t bother me at all!

I’ve also discovered a new life goal to add to my list…make it to every single Disney park in the WHOLE WORLD!!! A lofty goal to be sure! But in 2018, I’m already going to be seeing 3 different Disney’s in one year. Obviously Disneyland Paris, Disney World back home, AND…Disneyland California in June with my friends Erin and Cristina! I love how a plan comes together!! 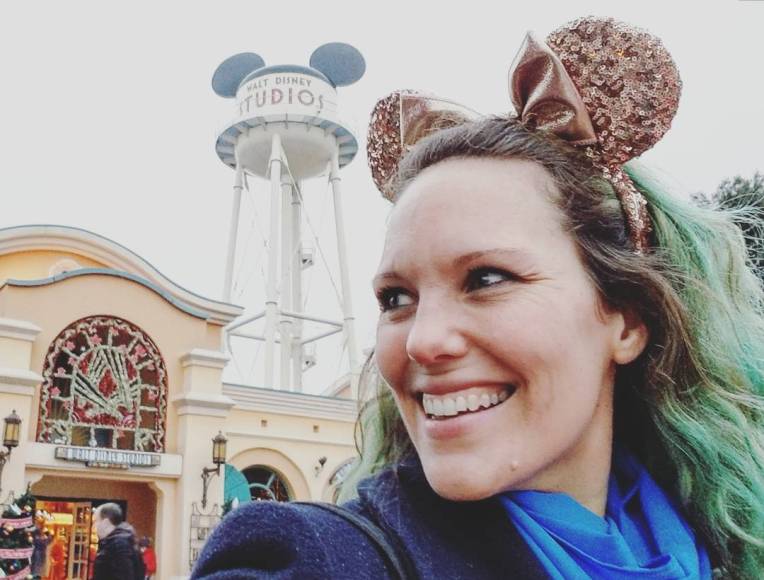 Disneyland Paris has 2 parks to experience. And since this is my big trip…why skimp now! I bought a park hopper and it has been TOTALLY WORTH IT!!!

Ok, something I’ve discovered over here. The meals are amazing! In Paris, they believe in a balanced meal. So every meal comes with a side salad or veggies, a dessert and a drink. And it’s more affordable than I would have imagined a complete and balanced meal at Disney to be. 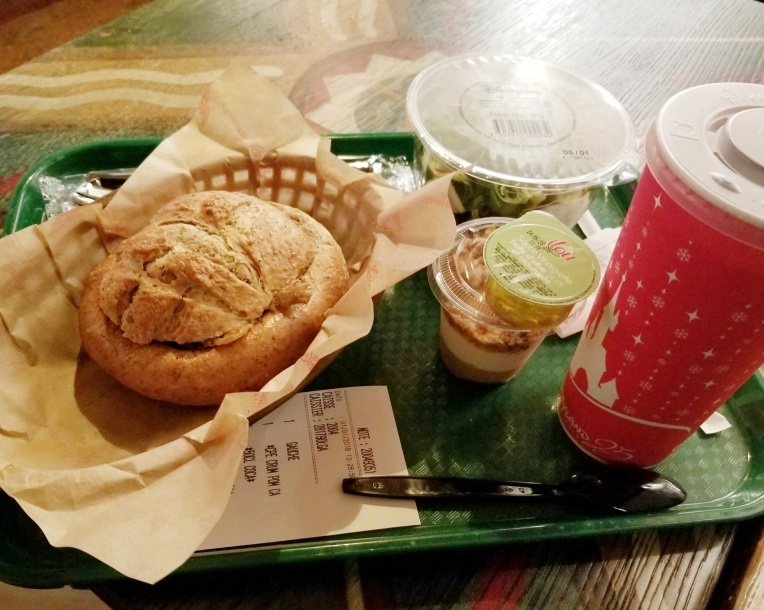 And guys…Mickey LOVED my bright green hair! How cute is that!

I miss the big hat that used to be at MGM (Hollywood Studios) back in the day. But look what Paris has…

The day just got better and better as it passed by. The weather went from dreary to almost sunny, back to dreary, then there was a break around sundown and the evening was perfection.

I wandered back and forth between parks, doing as many rides as I could, watching both fireworks shows and just generally being the very happiest version of myself!

Best thing about going to Disney alone…delicious Mickey-shaped cakes for ONE!! 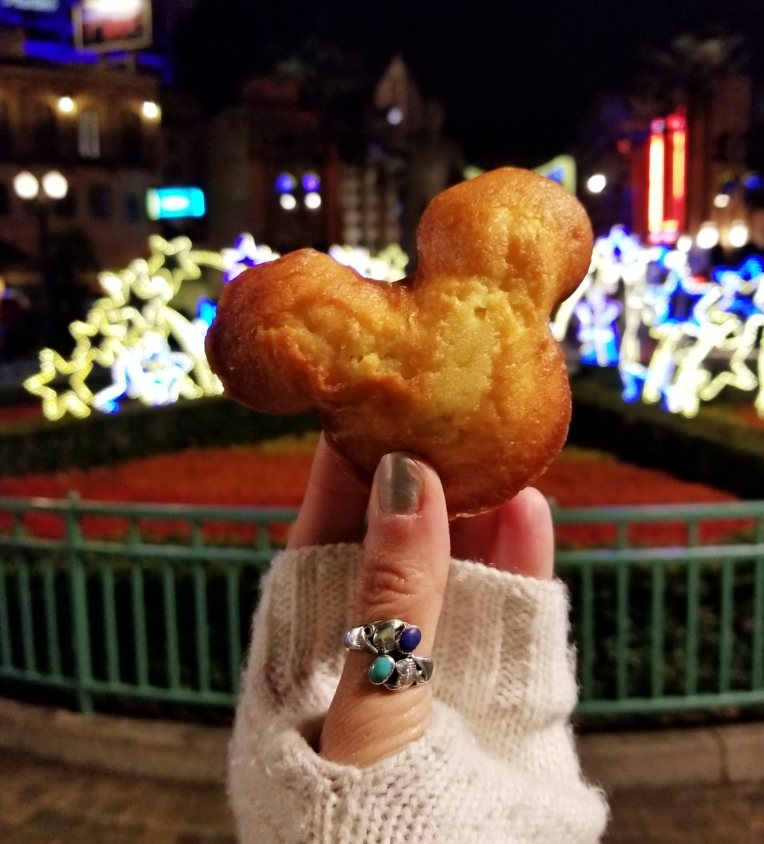 First fireworks show of the night was at Studios…

And then it was back over to the pink castle for their fireworks show!! 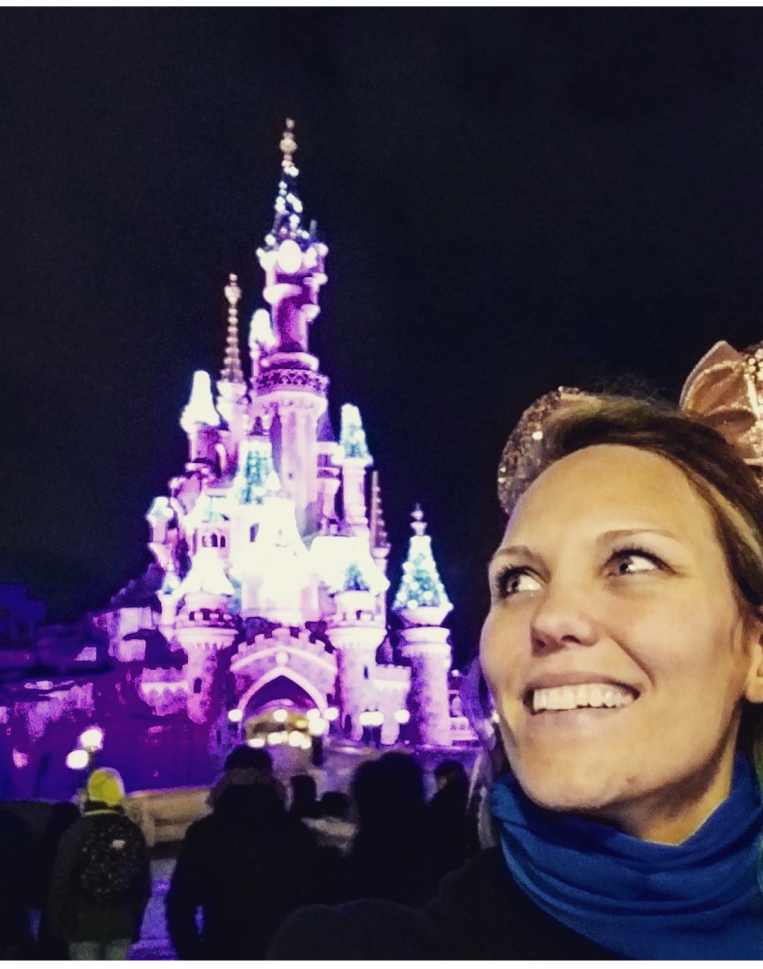 There was an error retrieving images from Instagram. An attempt will be remade in a few minutes.

102 members
We will be reading Star Wars books for foreseeable future. If that sounds good to you, join in!! There is always room for Star Wars fans in my book club!


View this group on Goodreads »
Share book reviews and ratings with Star Wars Book Club, and even join a book club on Goodreads.
<script
%d bloggers like this: